As well as not having blogged since July, I haven’t done any spinning since then either.  During the blogathon, I posted that I was spinning some gorgeous merino fibre.  I got maybe 10g of the 100g braid actually done, and the spinning wheel has been in a corner ever since.  I suppose I sort of lost my spinning mojo / motivation, then I was busy with other things.  But I’m now feeling much more motivated, and I suddenly felt like actually finishing that.  So, yesterday I hoiked the wheel back out of the corner, sat it in front of the telly, and spun all through Strictly Come Dancing and Casualty.  And then, because I was on a bit of a roll, I put on the last two eps of Flash Forward which I still had to catch up on, and kept going.  I’d split the braid into two approx 50g sections so that I could spin two roughly equal bobbins full, and I’d been aiming to finish the rest of the first 50g.  In fact, I finished that first bobbin, and now I’m half way through the second: 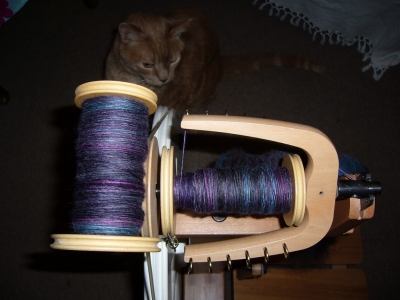 I’m going to see if I can get a bit more done tonight before I go to bed.  I’m still on a little bit of a sci-fi high from the new Doctor Who episode / special tonight, “The Waters of Mars”.  Can’t wait til the next one at Christmas!  But I need to wind down a bit more, so a bit of podcast listening and spinning should do the trick.  Hopefully, I’ll get these singles bobbins finished and then plied within the next couple of days.  I might use the remainder of my birthday money to get a niddy noddy, too.  That’ll make winding the finished yarn back off the bobbin much easier.