For nearly 18 months now, my left shoulder has been “ouchy”.  By which I mean, there are stabbity pains in the joint, the muscles down my upper arm have gradually got more and more tense, and putting my arm back to put on a coat or whatever sometimes just didn’t really work.  In summary: ow.

But hooray, I’ve finally worked my way up the waiting list and a couple of weeks ago I saw the physiotherapist at the hospital for my first appt.  And guess what?  My posture is completely borked, and my back is as tight as an exceedingly tight thing, which has caused and/or exacerbated inflammation of my shoulder ligaments(? tendons? I forget).  Then blah blah tl:dr subsequent tensing of the arm muscles and it’s all been a whole catch-22.

So, I’ve got exercises to do, which I think are definitely helping, but the one thing that she said also needed to be sorted out asap was my computer desk ergonomics.  I spend an awful lot of time sitting here, and I have known it needed sorting out: there was a shelf for the monitors which put them too high even if I had my chair up as far as possible, which in its turn meant that my short little legs were dangling in the air.  Plus, I was smooshed up against the wall on my left side and, it turns out, had my mouse too far over to the right!  Whoops.

I have actually been looking for a new desk for a while now, but can’t really afford one just yet.  However, my brother came up with a couple of excellent ideas: Mum is redecorating his old bedroom, complete with new furniture which meant that his old desk was going spare.  So I’ll be getting that once we can get it over here.  And then he asked if I could detach the monitor shelf.  That hadn’t even occurred to me.  Yes, I could.  So I did.  Then I moved the printer (which was on the right of the desk), pulled the desk away from the wall, and put the printer in the resulting space there instead. 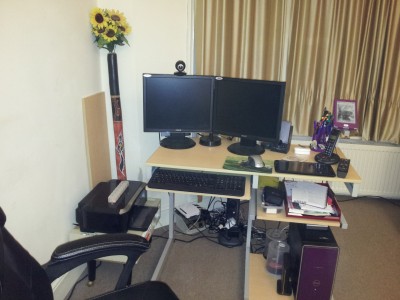 It’s not the perfect solution: there’s a middle shelf bracket that means I can’t put the monitors right to the back of the main desk, but since the keyboard is on a pull-out tray, I’m still a good distance back.

I’m left with less workspace for now, but only until I get the second desk.  And I’ve been able to put my chair back down to a me-sized height.  This means that I’m finally, for the first time in years (!) sitting properly at my desk.  So much better!

I think it also helps that a bloke I know is doing a course in sports massage at the college, and I get to be one of his guinea pigs.  Doing the physio exercises unsurprisingly stretched things in my back that’d been determinedly tense for ages, so it was fab having that ironed back out again.  I have two more sessions with him to go, too.  :-)

This entry was posted in General Rambling and tagged computer, crosspost, exercise, health, life in general. Bookmark the permalink.