For nearly 18 months now, my left shoulder has been “ouchy”.  By which I mean, there are stabbity pains in the joint, the muscles down my upper arm have gradually got more and more tense, and putting my arm back to put on a coat or whatever sometimes just didn’t really work.  In summary: ow.

But hooray, I’ve finally worked my way up the waiting list and a couple of weeks ago I saw the physiotherapist at the hospital for my first appt.  And guess what?  My posture is completely borked, and my back is as tight as an exceedingly tight thing, which has caused and/or exacerbated inflammation of my shoulder ligaments(? tendons? I forget).  Then blah blah tl:dr subsequent tensing of the arm muscles and it’s all been a whole catch-22.

So, I’ve got exercises to do, which I think are definitely helping, but the one thing that she said also needed to be sorted out asap was my computer desk ergonomics.  I spend an awful lot of time sitting here, and I have known it needed sorting out: there was a shelf for the monitors which put them too high even if I had my chair up as far as possible, which in its turn meant that my short little legs were dangling in the air.  Plus, I was smooshed up against the wall on my left side and, it turns out, had my mouse too far over to the right!  Whoops.

I have actually been looking for a new desk for a while now, but can’t really afford one just yet.  However, my brother came up with a couple of excellent ideas: Mum is redecorating his old bedroom, complete with new furniture which meant that his old desk was going spare.  So I’ll be getting that once we can get it over here.  And then he asked if I could detach the monitor shelf.  That hadn’t even occurred to me.  Yes, I could.  So I did.  Then I moved the printer (which was on the right of the desk), pulled the desk away from the wall, and put the printer in the resulting space there instead.

It’s not the perfect solution: there’s a middle shelf bracket that means I can’t put the monitors right to the back of the main desk, but since the keyboard is on a pull-out tray, I’m still a good distance back.

I’m left with less workspace for now, but only until I get the second desk.  And I’ve been able to put my chair back down to a me-sized height.  This means that I’m finally, for the first time in years (!) sitting properly at my desk.  So much better!

I think it also helps that a bloke I know is doing a course in sports massage at the college, and I get to be one of his guinea pigs.  Doing the physio exercises unsurprisingly stretched things in my back that’d been determinedly tense for ages, so it was fab having that ironed back out again.  I have two more sessions with him to go, too.  :-)

There are many more things I could list (music! yarn! spinning! knitting!), of course, but those are three just off the top of my head.  Happy Thanksgiving, everyone.

I should have taken a back-up after I posted yesterday.  I should have known.  But silly me, I didn’t.  So the entry I did post is gone, eaten I assume by the server move that’s happening with my web host at the moment.  It didn’t help that I was having computer troubles the same day.

My livejournal feed did manage to grab the entry before it vanished again, so I can tell you that it was posted at 23:57, the post id is one which doesn’t exist in my current database, and the excerpt text (whyyyyy did I never change to full text feeds?!) says:

“Oh dear, my computer hasn’t been firing on all cylinders today.  I’m pretty sure the problem was with my virus checker since it all started after a change to that.  I’ve run a ‘repair’ thingy on it, and hopefully everything …”

… and then I continued on to say that all should work now, fingers crossed etc, the end.  That LJ feed will only stay there for 10 days, I think, so it’s not a permanent record.  Bah!

I hope the mods are OK with counting this for yesterday’s NaBloPoMo entry, considering I did post, but it vanished.  I shall drop them a line to check, I think.

This will make more sense after reading the next chronological post, but the proper post from 18th Nov went missing.  But!  Here is proof that it did exist:

Having heard back from the lovely Nablopomo mod, I have the go-ahead to backdate this post so that I don’t miss out on an entry yesterday. Hooray!

I’ve been doing housekeeping tasks on the computer all day1, and I still haven’t even scratched the surface.  Or that’s how it feels – I’ve backed a load of ebooks and photos up onto DVD, and cleared up my podcasts folder… and I still have far too much to do.  I need to grab one of those programs that sorts out all the broken stuff in the registry, etc.  Although I don’t know if I have room to install one.  Oh noes, it’s all so difficult!  Heh.  Shall I just do a reformat and reinstall?  It’s about time I did anyway.  My poor computer can’t cope with much as it is – it’s getting a bit elderly, relatively speaking.  If only I could (no offence, ‘puter) replace it.  Not all of it, since some parts are just fine.  But the most important components could do with replacing or boosting, no getting around it.  Time to start saving up!

1 OK, that’s a slight exaggeration, since I have been out to KnitJam this evening as well, and done a bit of spinning (while waiting for DVDs to burn, but never mind).

I’ve decided to sign up for July’s NaBloPoMo again, because why not?  I won’t do the alphabet thingy again, even though it really helped me going, because I’ll have the Tour de Fleece to post about for a good part of the month.  I’ll find other things to keep me going for the rest of the time.

The summer spring-cleaning is continuing on here in my flat.  I’m on a roll!  I’m also going to be doing some tidying of the computer.  I haven’t done that for waaay too long.  There’s a whole load of pointless old files that need deleting.  Plus, I’m going to change my broadband provider to a better tariff.

I’m also ridiculously excited because I just found out that Question Time is going to be on in Bexhill in a couple of weeks.  I’m so applying for the audience.  I must find out if anyone else wants to go too, though.  I’m not sure if anyone I know locally would be up for it, but I’ll check.

… how quickly I can post several entries in a row when the pressure is really really on!  I’m not being helped by either my fingers, my keyboard, or my computer in general – I’m not sure which, and it could be a combination of several things.  But everything is sloooooow, and I keep making enormous typos that I have to go back and fix.  Partly because I type pretty fast, and the text isn’t showing up on the screen until I’m waaaay past the mistake I just made.  Except it takes ages to get to the right place to make the fix, even when clicking with the mouse.  I probably need to reboot, but I’m reluctant to do that until I’m caught up on my post count.  Two more to go!

The blogathon site challenged us to post pictures of our workspaces – I’m late for the challenge because I only just saw it, but here’s mine: 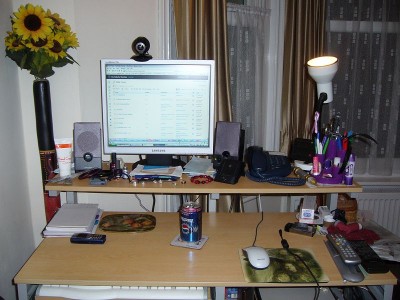 Yes, that’s a didgeridoo in the corner with a bunch of fake sunflowers in the top.  And The Master’s laser screwdriver (the sonic screw driver is hidden behind that dagger shaped letter opener in the desk tidy).  There are two mobile phones because I’m in the middle of changing from one to the other.  Lots of bits of paper, remote controls for the telly and hi-fi, hand cream, nail varnish, and way more jewellery than I ever wear at once – I tend to sit down at the desk, take it off and leave it there.  Keyboard, monitor, landline phone, speakers are obvious.  As is the desk tidy full of pens, pen drives, a lip salve, nail clippers and sundry other stationery items.  Um… mp3 player, watch, meds, a stone with a hole through it, notepads, an inhaler, some fingerless gloves that Charlotte made me.  Oh yes, and a sheep and a tiny Dalek.  Hooray!

—————-
Listening to: Florence And The Machine – Girl With One Eye (Bayou Percussion Version)
via FoxyTunes

Well…. bother.  It looks like I have to restart my browser.  It’s all gone a bit wonky.  Back shortly, I hope!  Have a picture of the weather to keep you going: 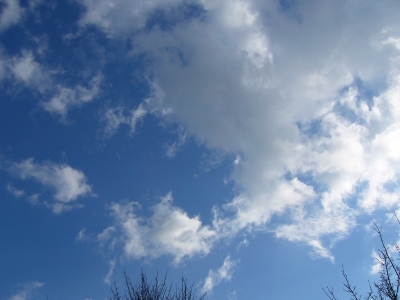 Since I’m still playing catch up, here’s yet another picdump: days 35 to 44 of my Project 365 photos. If you want to see all the photos so far, click on the Project 365 category link, or check out the Project 365 folder in the photo album.

On to the pics (click them for the full sized versions):