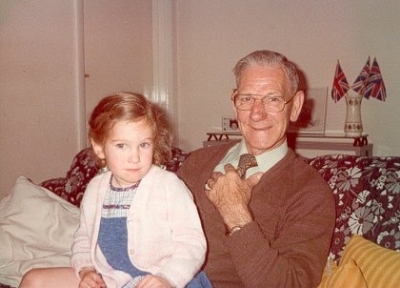 That’s the two of us together when I was small.  He died a few years ago now, and for another few years before that wasn’t really ‘himself’ due to Alzheimer’s, but other than that he was busy and active his whole life.  He was a fireman in London during the Blitz. 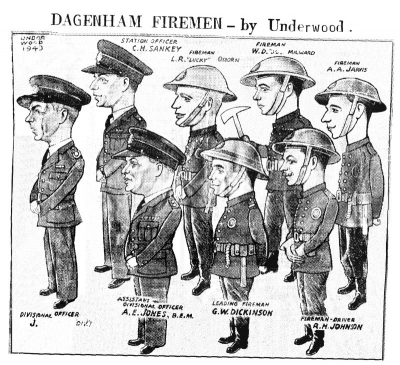 He then stayed on in the fire service for the rest of his working life.  He’s on the far right in the above cartoon – I think the date on it is 1949, but it could be ’48 or even ’40.  I won’t go into some of the stories he had to tell now, but there were some dramatic ones!  He travelled a lot, too, I think mostly after he’d retired.

So that’s it, really – happy birthday to you, Poppa, and Happy Centenary!

Today is my lovely friend Noxie‘s birthday, so much love and happy returns to her!  We originally met through both being fans of Buffy the Vampire Slayer and are still friends twelve years on!  Isn’t the internet grand?

As for me, I’ve spent the day plying and knitting again – some progress made, nothing finished as yet!  Hopefully I’ll have more to report tomorrow.