Today has been a day of variety, which has been nice!  I started out by going up to the Christmas fair for Mum’s church – I got there quite late on, so I helped clear up and carry the remaining stuff back up to the church.  I got a few nice cards and nick knacks for gifts, so that was a worthwhile trip.  Then I walked with Mum back to her house for a drink and then a lift home.

On the way up to Mum’s place, I stopped off and did a geocache that was en route.  It took me a bit longer than I’d planned due to me being disorganised with my stuff, but it was still a speedy one.  Not a micro one this time, but a still small one.  So not big enough to put the travelling monkey into, yet.  Poor monkey!  I’ll move him on soon, by hook or by crook!

After visiting at Mum’s for a while, we came back here and had dinner – stir fry followed by cupcakes!  Then Mum went home and I’ve been knitting and watching Strictly Come Dancing.  I’m still working on the Travelling Woman, but hopefully I’ll be done soon.  Maybe tonight?  Maybe tomorrow.

And then I’ve been playing with Blip.fm – I’ve put a widget linking to my account there in the sidebar, and I think it’s possible to play some tracks directly from here?  I’m not sure, I’m still figuring it out.  That’s not what I’m using it for, anyway.  Mostly I’m listening to the songs my friends have playlisted.  Is that even a word?  Probably not, but I know what I mean, and I’m sure you do too.  Anyway, I thought I’d put the widget up here because in the first place I can, and also because I’m trying to get all my web stuff better linked together.  Integrate my web presence.  Oh how pretentious. ;-)

Woohoo, I’ve completed NaBloPoMo for June.  I shall give myself a pat on the back… and maybe check if there’s a “winner” badge or something.  No big deal if not.

I’ve also been seeing how I can do on the Monthly Scavenger Hunt on Flickr.  This is my first month, and I didn’t get something for all twenty items, but I managed to do sixteen, so that’s not a bad start!

So, what next on the blogging front?  Now that I’ve managed to maintain blogging through June, I don’t want to just stop again.  The Tour de Fleece is coming up, so I think I’ll plan to post an update on how I’m doing each day of that… which will mean it’ll be very spinning-centric around here for a couple of weeks.  I dare say I’ll ramble about other things though.  I can only say “today I span such and such a thing, here’s a photo” so many times! 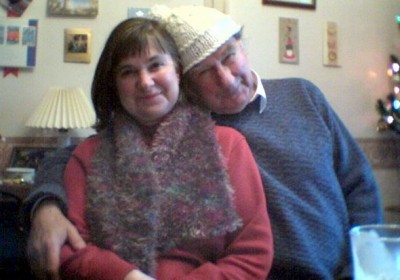 Well, since I’m suddenly really hungry, I think I’ll celebrate having caught up with myself (I have, right?) by going and getting that toast and some orange juice.  I might also reboot the computer.  I think it really needs it.

When I come back, I’m going to answer my comments, and see if I can also make a post or two answering questions I’ve been asked.  Back soon!  Really, this time!!

Which means that I’m not only one post behind.  Hooray!  Unfortunately, I can’t think of anything to say for this one.  How’s everyone else getting on?  I was really sorry to see that Renee had needed to get some sleep, but I completely understand why – I was beginning to worry if I might have to do the same thing because I didn’t want to risk making myself ill, pushing myself into a manic or depressed, or mixed-cycling phase through lack of sleep.  Or really, because my sleep routine was messed up.  I’m pretty sure now that I will in fact be OK, and I’m likely going straight to bed at 2pm and I dare say I’ll sleep til morning.

Feeling much more relaxed now – my shoulders are looser and my back is happier.  Hooray!  Time to go and get some breakfast together, then.  Mmmmm….

Food is helping, but I think I have to take a brief time out, or I’m going to fall asleep on my keyboard.  Even though my back is killing me!  Good lord, this getting older thing is obviously catching up with me!  I don’t remember having this much trouble by this time last ‘thon.  And I know I didn’t the first year I did it back in 2003… because I was manic and the time and not sleeping anyway.  Whoops.

I’ve tried getting up and moving around, doing some stuff around the flat, splashing cold water on my face, but as soon as I sit back down I’m half asleep and really uncomfortable again!  So I’m going to go and sit on the sofa and knit for a little while.  Listen to a podcast, maybe.  I’ll come and check back in, but there probably won’t be much of interest here for at least an hour (not that there has been recently anyway!).  See you later!

No, it’s no good.  I’m abruptly starving!  I have to go and get something to eat.  Back soon-ish!

I’m considering finding something to eat… although would that give me a kind of jet lag, I wonder?  Also, I’m not actually that hungry, I just feel lacking in energy.  I might go and dunk my head in some cold water.

Yum, that was good!

—————-
Listening to: Florence And The Machine – Kiss With A Fist
via FoxyTunes

Now I really want to go camping again!  I have the opportunity to go with the group from C House again in September and I’d really love to because it’s for a week, and I think to the New Forest.  But it’s right before M & E’s wedding, and I’m not sure that I’ll be able to afford it. *sigh*

I meant to post these weekly, but I’ve gone and slipped up already.  So here are another two week’s worth of Project 365 photos.  They’re also up at Flickr in my Project 365 ’09-10 set and in the Project 365 album for this year in the photo album here (you can see the great-big full size versions there).  This time I’m going to put the medium-size pics up here rather than the thumbnails and put some comments in as well.  Ideally I want the medium pics to link to pop-ups of the full size versions, but the plugin I’m using to integrate the blog with the photo album is being a bit temperamental about that.  But with a bit of luck that’s what I’ll get.  Here we go:
END_OF_DOCUMENT_TOKEN_TO_BE_REPLACED

On the right day for a change, my answers for this week’s Friday 5: