I’ve been having a really good clear-out over the last few weeks, and I’m starting to feel less mentally cluttered as well already. I’ve even eBayed more of my yarn. I know! Can I really be breaking my hoarding mentality? Well, no, not if you look at my bookshelves (MY books *clings*) and, uh, the remainder of my yarn stash. Not to mention the contents of my wardrobe and drawers… and a couple of suitcases… However, I am going to eBay some more stuff. Not yarn this time (although I might be able to persuade myself to part with a couple more skeins), but things like my spare Palm cradle (never used) and serial cable (not used since approx 3 computer upgrades ago)… oh, and I’m sure there are some other things. I have also sorted out more clothes and knick-knacks etc to go off to the charity shop. I think I still have more to do there, though!

Unfortunately, I’ve been a bit stalled on the whole thing because I’m still ill. Bleuch. I left the flat yesterday for the first time in about 2 weeks (alright, maybe my mental health hasn’t been ideal: being stuck indoors ill was threatening to push me into a ‘down’, but I think I’ve caught it in time) because I had to go to the Post Office, and stopped in to speak to the pharmacist on the way. She reckons I have bronchitis or a chest infection, and what with being asthmatic already, I’ve been told to go to the doctor tout de suite. I know, I know, I should have gone a week ago. I am Procrastination Woman. In this case, that’s particularly stupid of me since it means I’ve been propped at a weird angle in bed for several days since I can neither sit/stand up or lay down normally and breathe comfortably. V annoying. Oh well. I have an appointment this afternoon. I’ll be fixed soon. On the plus side, this whole thing seems to have sorted out my insomnia / wonky body-clock thing that I had going on: I’m now tired / sleeping during the actual night again, instead of being awake all night and tired or asleep all day. Hoorah!

In knitting news, I have got some work done on my WIPs. I really must remember to make a couple of posts about my current WIPs and recently completed FOs to spring-clean that off my mental to-do list. Mainly I’ve been working on “Mmm, Refreshers”, which is a Christmas gift. Can’t say anything else about it in case the recipient trundles over here. You never know with my friends and family *peers around suspiciously*. I’ve also done a bit of “WFS” (likewise, Christmas), and some of my Fireworks socks… which are for me me me, so there. Obviously I finished my Tête à Fetching (wore it when I went out yesterday), and I’m really chuffed with the response – some people have said they like it and want to make it, it’s in a few queues (and one in-progress!) on Ravelry, and I even got a really lovely comment from Cheryl Niamath who designed the Fetching gloves. :-) I’ll get the scarf pattern written up soon-ish as well, but I want to make a wider version of it for Mum first. Once I’ve finished something else, that is.

I actually think my WIP tolerance has been reached. If I cast on one more project, my head would explode. I can cope, just about, with the number I have going at once right now (8 plus 3 in hibernation) because I have a definite Christmas deadline for, um, three of them. Although I have at least two more things I wanted to cast on for gift knitting as well. Oh dear. But I’m not going to think about that now! The thing is, those gift knits are the ones which are taking priority, and the rest are pushed to the back-burner. Some more than others – I’m still working on my various pairs of socks (for me) every now and again, to give myself a break. It seems to be working. But anyway, like I said, I’ll make a proper all-about-my-WIPs post a bit later.

I didn’t find my gloves, by the way. So far I’ve been wearing my Fetchings or my Hurry Up Spring fingerless ones, but I’ve wound a skein of Yarn Yard Merino sock into a ball to make some new ones – I think I’m going to make cabled ones with that. And I did crumble and get ones of the glove kits, so I’m going to make a pair with that too.

Yay, gloves! I’m not allowing myself to cast on for them until I’ve finished a couple of my current WIPs, though. Preferably the Christmas gift ones, since those have a deadline!

Hmm, was there anything else I was going to say? I can’t think… oh! I remember. I found a (the) Holiday Gift KAL-CAL. Just what I wanted! I have duly signed myself up. Um. Oh yes, and I’ve been working on my next (final? I’m not sure if I’ll be sending one more package or if I’ll split it into two – Katie, do you have any preferences?) SP11 package. Mwahaha. Etc. ;-)

Right, that’s enough being upright for me for the time being. I’m going back to bed for a bit to listen to the radio / podcasts while knitting, then I shall get up again, have foooood, and get myself off to the doctor’s. TTFN! 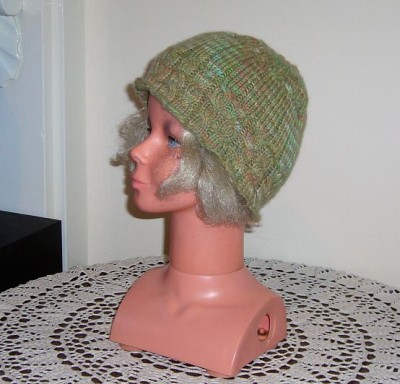 It looks a smidge larger on Angelique-the-Head than it really is, due to her being slightly scaled down. However, it’s easier to take photos of hats on her than on myself, so there we are. Point is, it fits me perfectly, and I love it!

What’s more, I’ve even written the pattern up and uploaded it just in case anyone else fancies knitting it themselves. I knitted it in DK weight, but like the Fetching gloves, you can use an aran weight to get a thicker, warmer fabric.

I’ll link it on Ravelry as well, because I can. And hey, if anybody else does have a go at this, let me know – I’d love to see what other people might do with it. I might be making another one for my Mum for Christmas, this time in Debbie Bliss Alpaca Silk aran. She wants a pair of Fetching (Fetchings?), you see. I should have enough yarn to make either a matching hat or scarf (post on that coming soon!) to go with them, I just have to ask her which she’d prefer. I don’t think I have enough for both, unfortunately. Luckily, since she asked me for the gloves, I can check back with her about a hat / scarf. This is not her Sekrit Xmas pressie!

Anyway, do let me know what you think of the hat – any problems, issues, vast donations of wealth…. ;-) This is the first pattern I’ve put up, so constructive criticism can only help any future efforts! Encouraging “I like it” comments are also, of course, extremely welcome! Thanks :-) 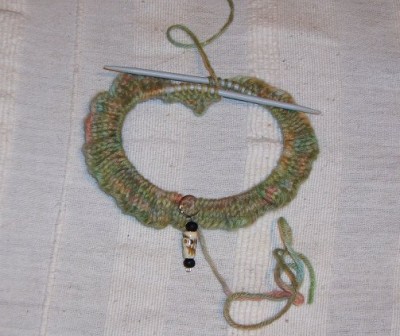