I haven’t blogged much recently because I’ve been knitting.  Which means I don’t have enough hands to type at the same time!  I should at least be mostly done with the things I’m knitting as Christmas presents.  Ahem.  I might be completely done, who knows?  I probably would have been fine, but Mum asked me for mittens which I then had to factor in… and it all went a little bit wonky.  Not too much though.

Other than present knitting, I’ve finished my gloves (pictures soon), done a bit of spinning at the 1066 Spinners group, and of course have been Christmas shopping.  There’s an open air ice rink in town for the festive season, so Jo and I are hoping to go down there at some point.  Although it’s just started snowing today, so I spose it depends how bad that gets.  I also did an hour of carolling at the local hospital last night with choir.  I really love singing carols, so that was lots of fun.  Even though I did have to stand in the front row where people can – oh no!!! – see me!  Happily for my ridiculous stage fright, most people didn’t stop and stare: we were in the foyer, so the majority of the people just passed through.

Anyway, I’d better go and have dinner before KnitJam tonight.  I’m sure there was something else I was planning to blog about, but I’m sure it’ll come back to me.  If not, it probably wasn’t important!

Actually, I’m fairly sure it’s just “Oratorios”.  Which is what I’ve mostly been singing lately, now that I’m a member of Battle Choral Society.  For any non-local people: no, we don’t wear chain mail, we don’t carry weaponry other than the heavy music, and we don’t make war on other local choral societies (although wouldn’t that be kind of fun? *g*).  Just like Battle Wool Shop doesn’t sell combative  yarn and needles (although, again…) and Battle Golf Club doesn’t practice an outdoor form of battle chess (I bet there is a Battle Chess Club, though, which may play normal or battle chess), it’s just that it’s based in the small town (large village?) of Battle.  Which is so named because it’s where the Battle of Hastings took place, with the abbey being built and then the town growing around that in the last thousand years or so.

Anyway, history lesson over.  I’ve been really enjoying being part of the choir, and would have been at rehearsals tonight if not for going down with this stupid cold – I’ve just got to the sneezy part, so I can’t very well go along and germify everyone else.  Bah.  At the moment we’re rehearsing for Haydn’s “The Creation” – concert at the end of the month!  And just a couple of weeks ago was the first concert I’ve done with the choir: Handel’s “Messiah”, which is one of my all time favourites, and luckily something I’ve sung many many times, since much of the practice for it was done before I joined!

Right, if I want to be well enough for KnitJam on Wednesday, not to mention choir next week, I’d better take myself back to bed.   I’m tempted to take my knitting with me, but I might be better off just trying to get some sleep.  Early night vs knitting?  Hmm, we’ll see.

Oh dear, it’s getting on for 2am, and I’m starting to flag just a little.  I spose that’s the trouble with this time-zone: half way through the ‘thon is tired time already.  I’ve had a walk around the flat, which has helped, and grabbed a KitKat.  Maybe that wasn’t a brilliant idea… I should probably have had a banana.  Oh well, I can always go back for one in a bit.

I didn’t do the Kareoke challenge that the Blogathon people set, because my upstairs and downstairs neighbours are trying to sleep, and I don’t see any point in doing it if you can’t do it with conviction and gusto!  Heather did it though – you should go and have a listen on her LJ.

Did you know that people have two (at least) voices? “Chest” voice and “head” voice*. I guess most people only use one most of the time, or don’t notice when they switch from one to the other. Mainly, it’s your chest voice that you use for speech. When you sing, you’re much more likely to leap from one to the other, particularly when there’s a large difference from one pitch to the next. A lot of singing training is to do with getting those different sounds to be consistent with one another. Not to have an obvious bridge moment where you suddenly go into high-squeaky mode or back down into your lower register. If you’ve ever played a wind instrument you’ll know what I mean: it’s much the same thing. It’s got to be smooth and without any odd swoops or jags or squeaks.

Anyway! The point is, right now I have very little chest voice. Speaking is all over the place. There are definitely swoops and jags and squeaks. Unless I deliberately pitch my voice into my head register. Singing, needless to say (particularly since I’m a soprano), is perfectly do-able. Not great-sounding for some things, but do-able. I went to Christingle service at my Mum’s church, and she was most surprised. I’m not going to talk in my head register, though, because it makes me sound about five! I’ll get by – I feel pretty much ok, I just sound croaky.

Huh, that was a sudden swerve into music geeking, wasn’t it? Um. Have a Christingle: 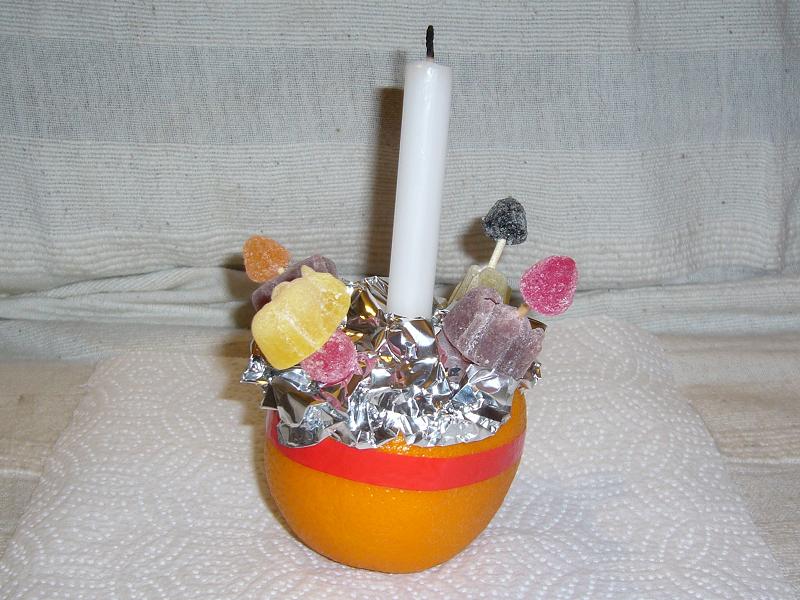 * This isn’t breath support: that’s another thing. Which comes from the diaphragm and… oh never mind ;-) I’ll shut up!

I’m still not ready for Christmas, quite, but I am slowly crossing things off the list:

I went to the HRC Christmas Party today… or the end bit of it, at least. I got waylaid by my neighbour, and although I did need to speak to him myself, I didn’t mean to end up talking for so long! Still, I got there in time to nab three chocolate fingers, listen to the band’s second set, and then go up and have a sing with them for the last few songs. Which was fun! I didn’t have time to think about it and freak out, which I think helped. And in a weird way, since I’d had a bit of a wobble when I first got there because it was a large, strange place filled with people (oh noes!), being crammed on stage felt like a much more familiar and safe environment! I know, I’m just odd.